CCIRA’s governance structure respects the sovereignty of each Nation, operates under a consensus decision-making framework and ensures each Nation has an equal voice. 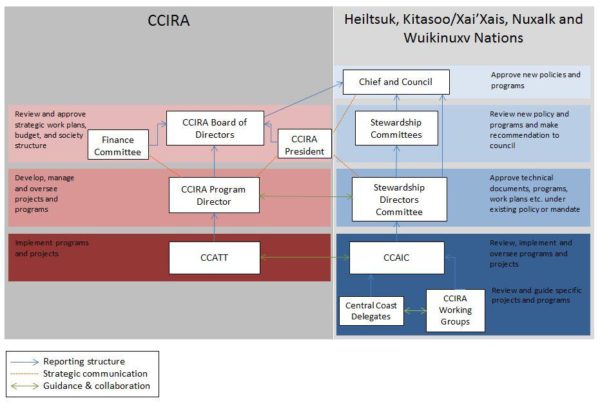 CCIRA Board of directors

The CCIRA Finance Committee (FC) is a subset of the CCIRA Board (e.g. 2 Directors). The CCIRA FC acts on behalf of, and within the powers granted to them, by the CCIRA Board of Directors. The CCIRA FC will work with the Program Director and Administrator to approve day to day budget adjustments and approve any new contracts or agreements not identified in the annual workplan.

The CCAIC consists of the technical team, the Community Marine Plan Implementation Coordinators, and each Nation’s Resource Office technical staff (as deemed necessary by each Nation). This Committee works together to address specific planning and management issues and any key implementation activities identified by the CCIRA Board on a day to day basis.

CCIRA participates in various province wide First Nations organizations and/or initiatives that require representatives appointed collectively by the member Nations.  The CCIRA Board is responsible for selecting all such regional representatives.  Presently, CCIRA sends delegates to the First Nations Fisheries Council and its working groups. CCIRA also supports a governance representative delegate to work with the Province and Federal governments on marine planning initiatives in the area.